Data mining in Hall (2015) and ignoring the press and social media nonsense storm I find that in the (insulin sensitive) men the measured fat loss using the gold standard (?) DEXA method was actually marginally greater on the reduced carbohydrate diet :

I'm not sure how this slipped past the journalists who were too busy reformatting press releases for publication, but that's life. The data tables are available for download at cell.com

yes folks, a slightly greater fat loss on low carb although the p=0.8 shows that the difference between the two diets was not statistically significant and we should say "the measured fat loss was the same in the carbohydrate and fat reduction diet interventions".

I wonder how Cell Metabolism can justify the title -

when the fat loss was statistically the same but the energy deficit was not - it was greater in the reduced fat diet (p=0.014) :-


OK so I chose to look at the men only. I did this because the women did not achieve a statistically significant fat loss on either diet :-


Table 1 in the study also shows the men and women to be statistically different in all parameters other than Age, Body Weight and Respiratory RQ so I feel justified in treating the groups separately.

The depletion of glycogen reserves is illustrated in the paper : 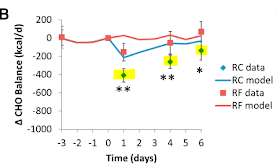 and I had a shot at extrapolating and quantifying this


with some linear regression this looks to be approximately :

and days 1-6 add up to about 1690 kcal of glycogen depletion displacing fat oxidation. 1690/6 = 281 kcal/day of glycogen, so the actual calorie deficit supplied by fat in the men is

In fairness there was also an increased CHO oxidation in the RF diet, again showing depletion of glycogen during the reduced calorie intake. This was 176 kcal/day.

It is a great shame that the study's data collection didn't commence after 9 days on the diet, when the glycogen depletion would have tapered off to a low level.
PhilT at 02:16
Share